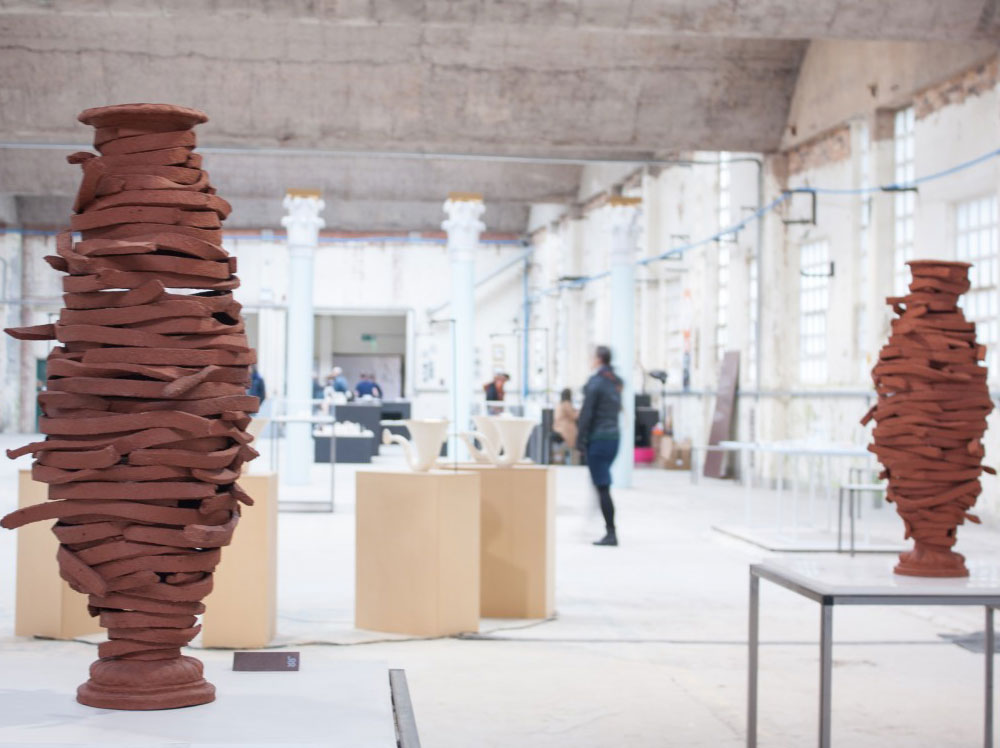 One of our in-house designers, Katy Lilley, takes us through the best exhibitions to see this year, from David Hockney’s return to the Tate Britain and Nottingham’s Earth and Fire ceramic showcase.

Arguably the most anticipated exhibition of the year, David Hockney returns with his first major UK retrospective in thirty years. London’s biggest critics have already given the soon to be octogenarian five stars for his latest exhibition, guaranteeing Tate Britain a blockbuster show and cementing Hockney’s reputation as the UK’s greatest living artist. Despite being famous for his paintings of his LA swimming pools and his more recent Yorkshire Landscapes, there will be a diverse collection of drawings, photography, print and video on display from his six decades of his career as an artist, ever since he graduated from the Royal College of Art. Booking tickets is highly recommended after his last exhibition at the Royal Academy named ‘A Bigger Picture’ sold out. Hockney has been quoted as saying, “I want my work to be seen” and by the end of spring this celebration of a much-loved artist will have no doubt been seen and praised by many.

This international contemporary ceramic show returns for a second year at its new home at the Granary Building, based at the university campus of Central Saint Martins, having previously been held at the RCA in South Kensington. Ceramic Art London is famous for being an opportunity to meet, talk and purchase ceramics direct from the artist, something you don’t get when buying direct from a gallery. You’ll find a mix of first time exhibitors as well as established ceramicists returning, such as Adam Frey, Kyra Cane and Chris keenan. Keen collectors get there early on the Friday morning in the hope of spotting the next Hans Copper or Lucie Rie of the future. Day tickets are £15 which includes an exhibition catalogue. With ninety ceramicists from around the world showcasing their work, there is a great temptation to buy from every stand – deep pockets are required.

This new exhibition shares five centuries of fashion at Chatsworth with the public. Expertly curated by American Vogue’s Hamish Bowles and creatively directed by creative duo Patrick Kinmonth and Antonio Monfreda, the show will feature a display of fashion, jewellery, design and textiles. Telling stories of the past through livery, coronation robes and fancy-dress costumes, the exhibit promises an insight into the Cavendish family’s wardrobes. As well as presenting styles of the past, ‘House Style’ will also be showing garments from designers including Christian Dior, Gucci, Helmut Lang, Alexander McQueen and Erdem, who have all played a fashionable part in the family’s lives. Tickets are available to purchase online, and you may also want to combine a visit with an exploration of Chatsworth’s stunning 105-acre garden.

Grayson Perry, now a household name, is famed for not only being a successful artist but more recently a television commentator. His appeal stretches across all class divides which shone through in his Bafta award winning Channel 4 series. Perry is highly eloquent, not simply in being able to talk to everyone, regardless of wealth or stature, but in his ability to listen and connect with people’s personal stories and belief. His honesty about his own upbringing and his transvestite alter ego Claire, has proven to be an inspiration for his work and previously provided tabloid gossip for the national press. Something Grayson Perry has worked to his advantage is his unpretentious manner. This new major exhibition at the Serpentine Gallery will no doubt continue to tackle social issues such as class, politics, sex and religion. Perry’s title of the exhibition ‘The Most Popular Art Exhibition Ever’, has been mocked because of its boldness, but Perry has never been one to shy away from controversy and will be hoping that it proves to be a self-fulfilling prophesy.

A yearly highlight for the Design team here at Denby, Earth and Fire is a must for anyone that loves ceramics. It’s the North’s answer to Ceramic Art London, only with a more relaxed feel. The show has been established for over 20 years but finds itself at its new location at the Harley Gallery. Its change in location means that it has been saved from potential extinction, which is a relief to over a hundred exhibitors from the UK and Europe and the hundreds of visitors who attend to meet and purchase ceramics directly from potters. There is a wide-variety of objects for sale from sculpture to jewellery and tableware. This show has an appealing atmosphere, with ceramic demonstrations happening throughout the weekend. Entrance is £5 per person.

A biennial event since 2009, this six week festival has evolved over its short history. More recently its exhibitions and events have taken place solely at the redundant Spode factory in the town of Stoke. The festival prides itself on showcasing contemporary ceramicists from around the UK and the world. One of the largest events for the exhibitors is the awards, with one cash prize of £5k and ten prizes of £500. Previous years there has been an on-site gift shop and a nice café. A warm coat is essential when visiting, as there is no heating in the former China Hall. The finalised list of events is yet to be released, however it is hoped that the show continues to include local industries and the talented potters on its doorstep.